Grenada, a spectacularly beautiful island, has lush green mountains, crystal waterfalls, golden beaches, and the fragrant spice trees that give the island its epithet "Isle of Spice". Come from late January to early march to get the added bonus of seeing the hills ablaze with hundreds of bright orange, flowering immortelle trees: pure magic. 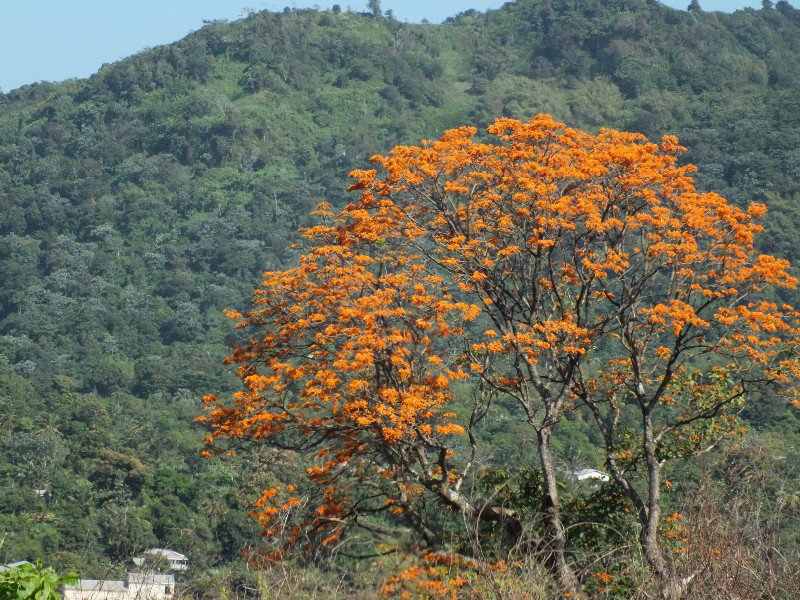 Grenadas history has been lively, with early wars and revolutions. More recently, things got exciting with the transition to full independence in 1974. Most Grenadians felt this was premature, and instead of jubilant celebrations, the island was on strike and in protest. Nonetheless, independence was thrust upon her, and Grenada came of age under the rule of Sir Eric Gairy, a flamboyant and controversial figure who had a very divisive effect on the population. This resulted in the 1979 left-wing coup by Maurice Bishop, who greatly admired Fidel Castro. Bishop attempted to turk Grenada into a socialist state. He improvised medical care and education, but he did so at the cost of freedom: anyone who opposed him was thrown in jail, and all independent news papers were banned. 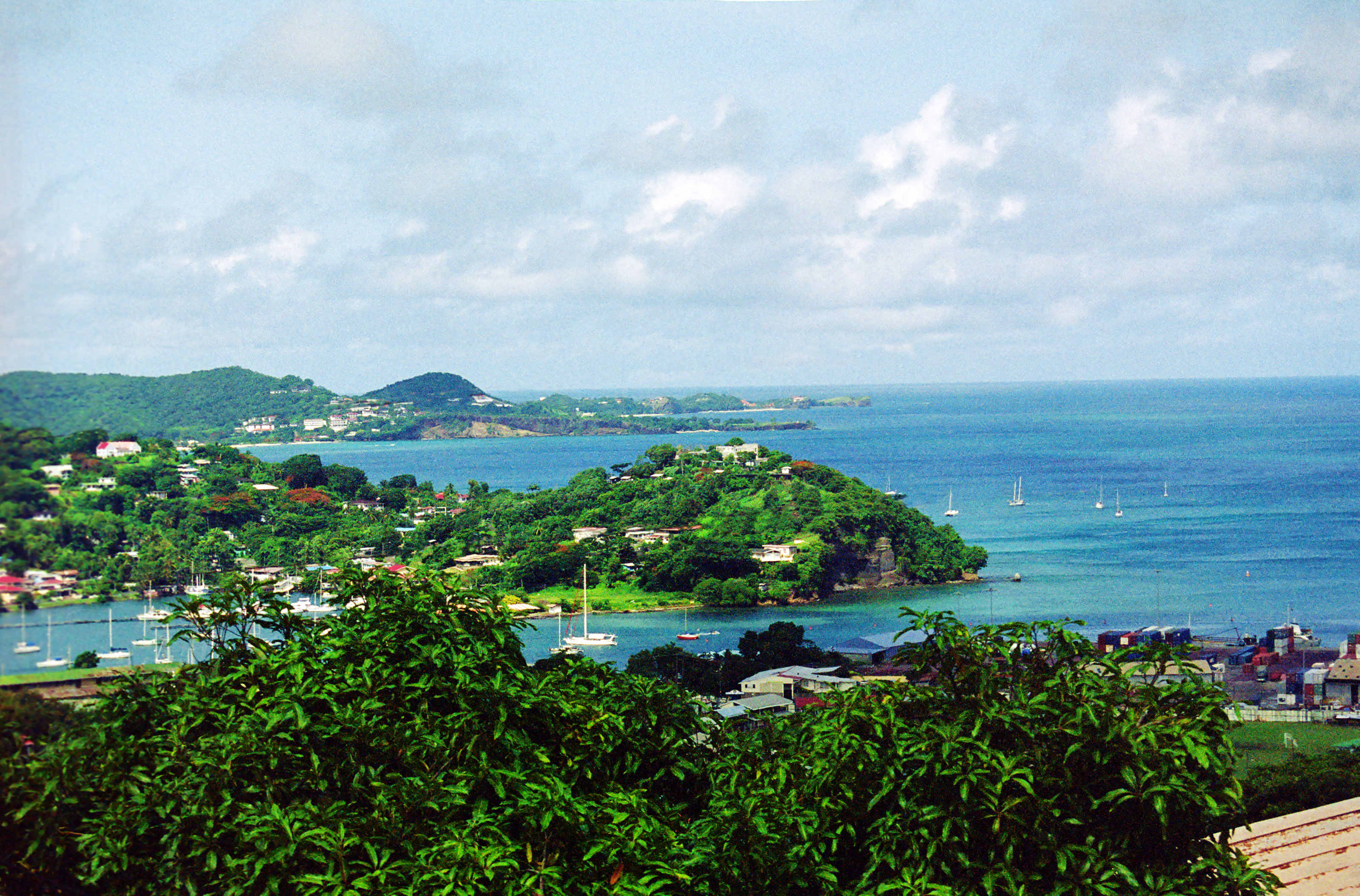 However, this didn't insulate him from opposition within his own ranks. Second-in-command Bernard Coard, his wife Phyllis Coard, and members of the army took Bishop prisoner in 1983. After a massive crowd freed him, an army group executed him along with haft his cabinet. At this point, the US, along with Grenadas eastern Caribbean neighbors (the Organization of Eastern Caribbean States), launched a "rescue mission" and were welcomed with open arms. Now, many years later, this is old history, and looking back over these last years, Grenada as an independent country has experienced the best, most democratic, and most productive years since it was colonized. Grenadians are a warm and hospitable people, exceptionally so once you get off the main tourist route. 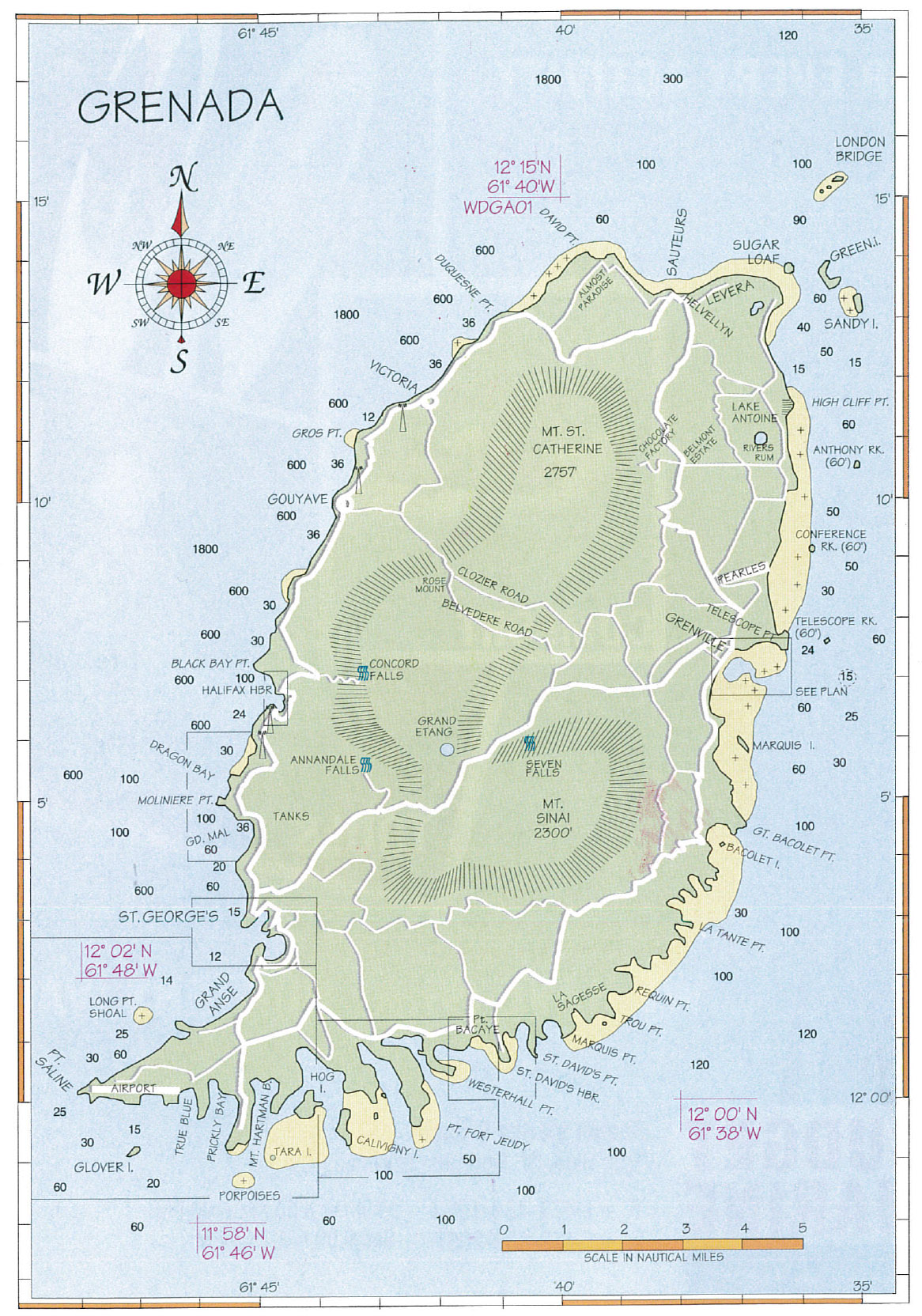 From a yachting point of view, Grenada has developed rapidly. Haulout facilities are found in St. David, Prickly Bay and Clarkes Court Bay. Marina facilities can be found in St. Georges, Clarkes Court Bay, Prickly Bay, Phare Bleu Bay, and Mt. Hartman Bay. St. George's has a big state-of-the-art Camper and Nicholson Port Louis marina, as well as a yacht club. Three big chandleries now supply yachting gear, and legislation has been passed that encourages yachting by allowing for low-duty supplies, parts, and chandlery for yachts. The yachting act also allows you to clear out at the same time as you clear in, as long as you are not staying more than three days. However, you do have to fill in all the forms twice.

Grenada is host to a few important yachting event, as well as smaller club races. The Grenada Sailing Festival, a week of racing and social events organized by an independent company, is held in January. All entrants are welcome, from serious racing boats to live-aboards. 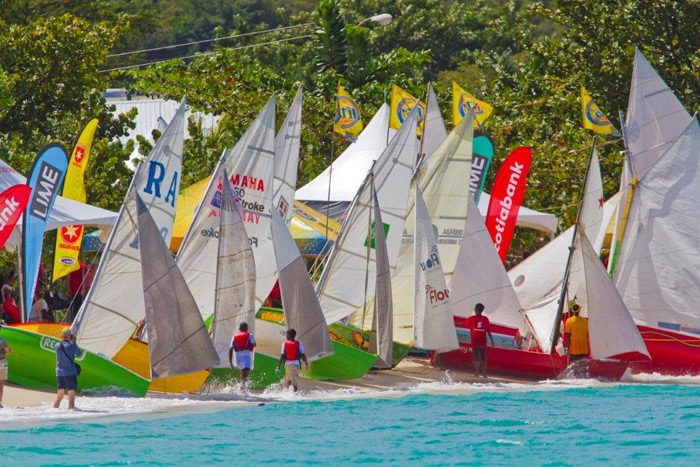 The round Grenada race, a two day event with a stop in Carriacou, is arranged by the Petit Calivigny Yacht Club (PCYC) and normally takes place in August. PCYC also organizes and supplies boats for a match racing every couple of months. Everyone welcome.

The Grenada Yacht Club organizes other races and Grenada has a strong marine trade association called The Marine & Yachting association of Grenada (MAYAG).

Few Islands are as photogenic as Grenada, with mountains, rivers, rainforest and houses surrounded by flowers. Sometimes when you are hiking along a river amid nutmeg threes, it has an uncanny resemblance to early pictured of the Garden of Eden. A swim in one of the waterfalls will leave you feeling wonderfully refreshed, your hair and skin feeling extra soft. Concord Falls are in beautiful countryside, and anyone with a spark of adventyre should hike the extra half-hour to the upper falls. Seven Falls are the best, a lovely one-hour hike. You need a guide if you want to make it to Honeymoon Falls, another half-hour from Seven Falls. Concord and Seven Falls are on private land, and the owners levy a small charge. 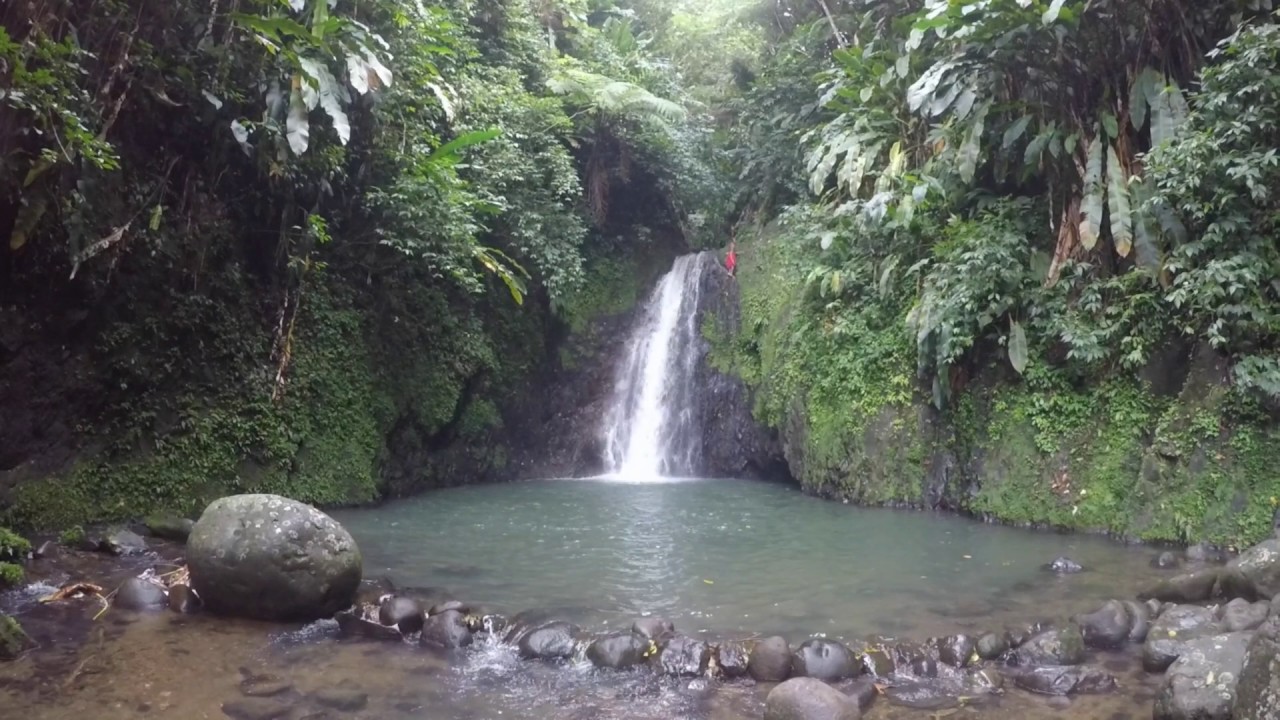 In 2004, Hurricane Ivan did huga damage throughtout the island, especially in the rainforest. The island has mostly recovered, and the rainforest is coming back well. the hiking is, in some ways, better then ever: the views are better and the paths drier. 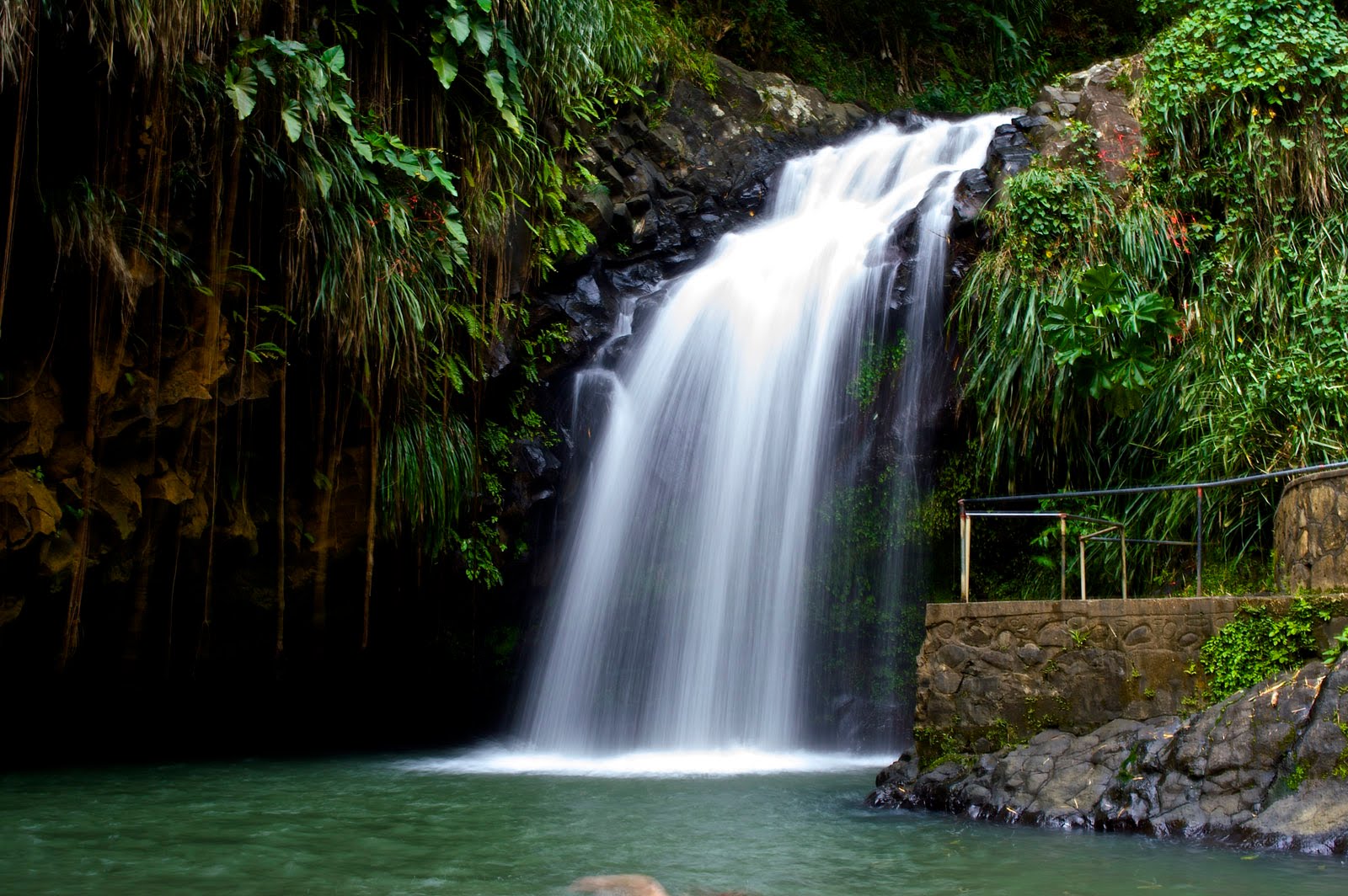 The most beautiful road in Grenada runs from Gouyave to St. Andrew. Is has two forks, the Clozier is the prettier, Belvedere the easier. You snake across the hearth of Grenada through verdant agricultural land, with lovely mountain views.

Grand Etang is a crater lake, and the Forest Center is close by. You often see monkeys where the busses stop. Trails are laid out so you can wander into the forest. There are wonderful hikes, including one halfway across the island (four hours). The road from St. George's to Grand Etang goes through some lovely forest, and you can include a detour to the Annandale Falls. 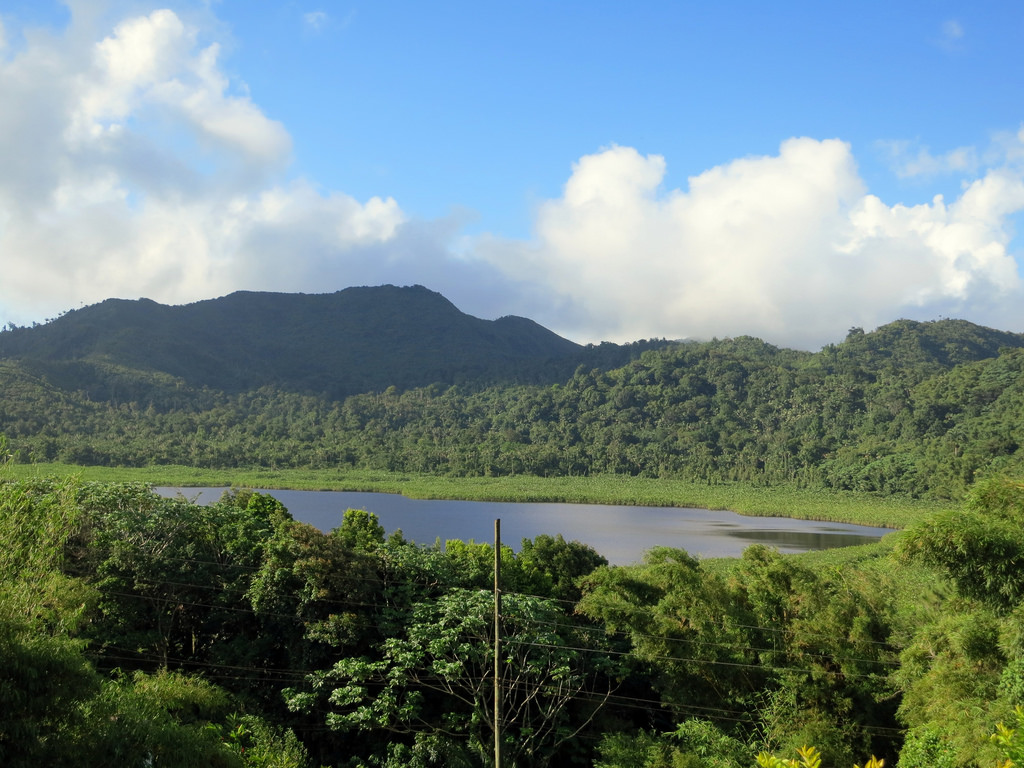 Grenada has its own organic chocolate factory, the brain child and passion of Mott, who loved sailing so much that he delivered chocolate to Carriacou in a tiny beach cat. Sadly, Mott died in an accident, but the factory has been matching on. Let the high-octane bars (71, 82 and 100% cocoa) melt in your mouth for a creamy chocolate flavor unlike any other commercial brand. Or try the delicious nibulicious or saltilicious bars. They all make perfect gifts. Better still, see where the chocolate comes from at Belmont Estate, a typical and very picturesque country farm, where the cocoa beans grow. Take the tour (5 USD) and watch how cocoa is extracted from the big fruits using the sun and people powered dance shuffle. They will show how the Grenada Chocolate factory takes these beans and processes them, using solar-powered, handmade, and vintage machinery. The Belmont Estate shop sells many kinds of delicious chocolate bonbons laced with local fruits that are only available there. A second factory has followed suit in a lovely old estate, producing Jouvay chocolate, which is competetive priced; their ginger bars are delicious. Grenada has a week-long chocolate festival in May.

Many years ago I used to keep an eye on a coconut plantation for a friend. To get there I passed the River Antoine Rum factory, where they made strong white rum called Rivers. I fell on love with this place, which still runs much as it has since the mid-1800s: a giant water wheel crushes the cane, the dry stalks are burned to heat up the juice, and large wooden scoops manually move the hot juice from one big cast iron bowl to the next as it gets hotter (they call these bowls "coppers", as the original was made of copper). They now open this rhum factory to visitors and give tours for $5 EC, which gets you a full explanation and a taste of the rum (ask for the stongest rum, drop a bit of ice in the glass, and watch it sink). They do not fire up the rum factory machinery every day, and it is more fun to go when everything is going, so call in advance and ask (442-7109 or 442-4537). The location fits well with visiting Belmont Estate, Both places serve lunch. 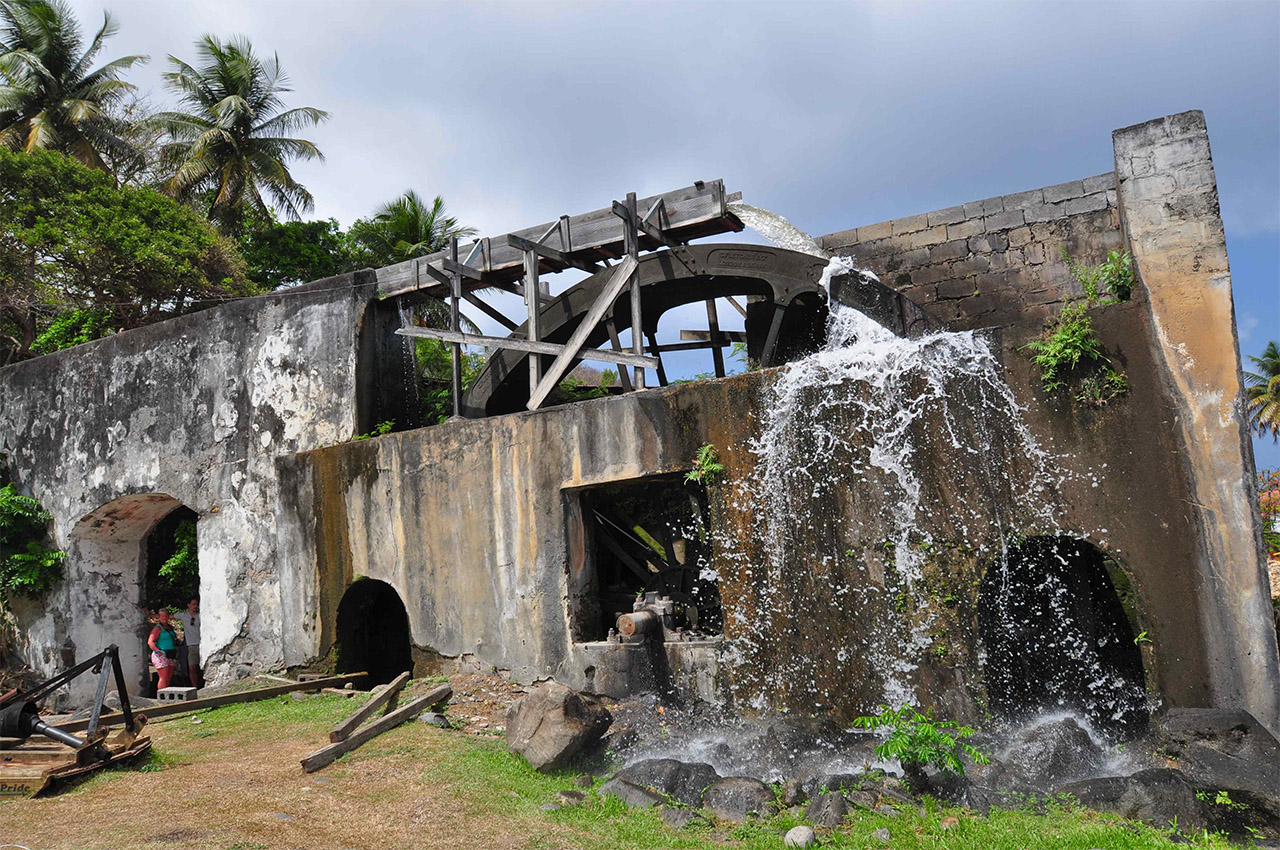 For a great country meal on a day tour, visit Petite Anse, which has a delightful location, hanging over its own beach, a five minute drive west of Sauteurs. Philip and Annie built this mini-hotel after crossing the atlantic on the ARC and chartering for four years. You can swim in the pool and walk in the beautiful garden, heading down past cottages tucked amid flowers and trees to the beach. They serve fruits and vegetables from their own garden, fish and lobster from local fishermen, and much of their meat is from local farmers. Their restaurant, with its wide ranging menu, is popular with both locals and visitors. They offer yachts their local rate for a weekend escape.

Fish Friday in Gouyave is a great event, fun, and inexpensive, with lots if vendors selling different seafoods. Drive, take a taxi, or join a tour. McIntyre does a tour that you can usually join at Prickly Bay or St. George's. They arrive about 1800 and leave about 2100, which gives you plenty of time there. 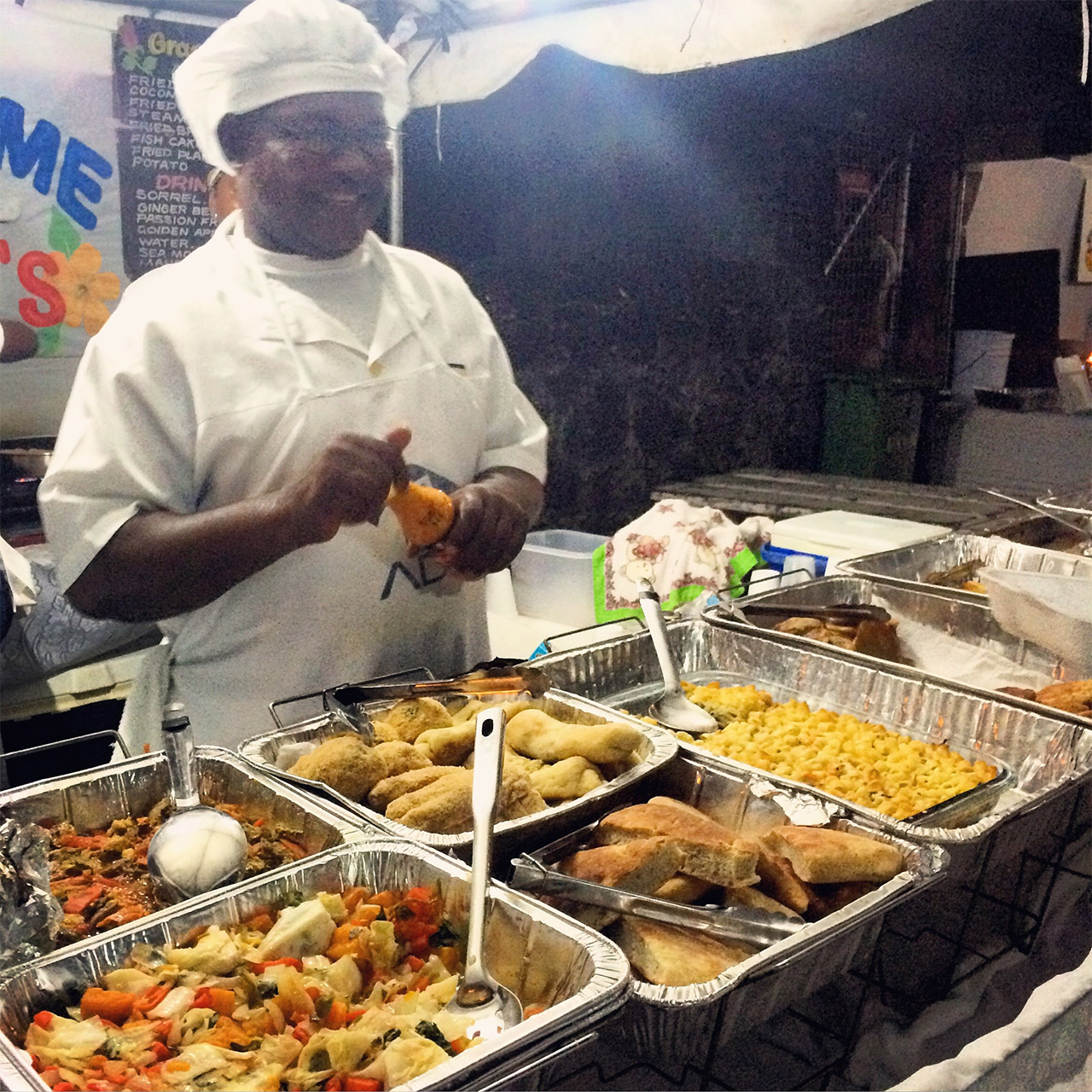 For hiking, Henry, of Henty's Safari Tours (VHF: 68), is the best man to contact (Note call sign: Henry Safari Tours). Henry specializes in hikes and knows the trails well, including seven falls. He also does turtle watching tours from May to August. Most other taxi drivers are reluctant to get their feet muddy, but there are a few exceptions, including Selwyn Taxi, who will hike and keep you happy.