For the dedicated into-the-heart-of-nature diehard. Barbuda is heaven on earth. It is a low island whose highest point is only 125 feet above the sea. It is large, over half the size of Antigua, with a mere 2000 inhabitants who live around the village of Codrington. Barbuda has so many miles of brilliant turquoise shoal water that, as you sail toward it, you can sometimes see a blue-green reflection in the clouds long before you see the land itself. 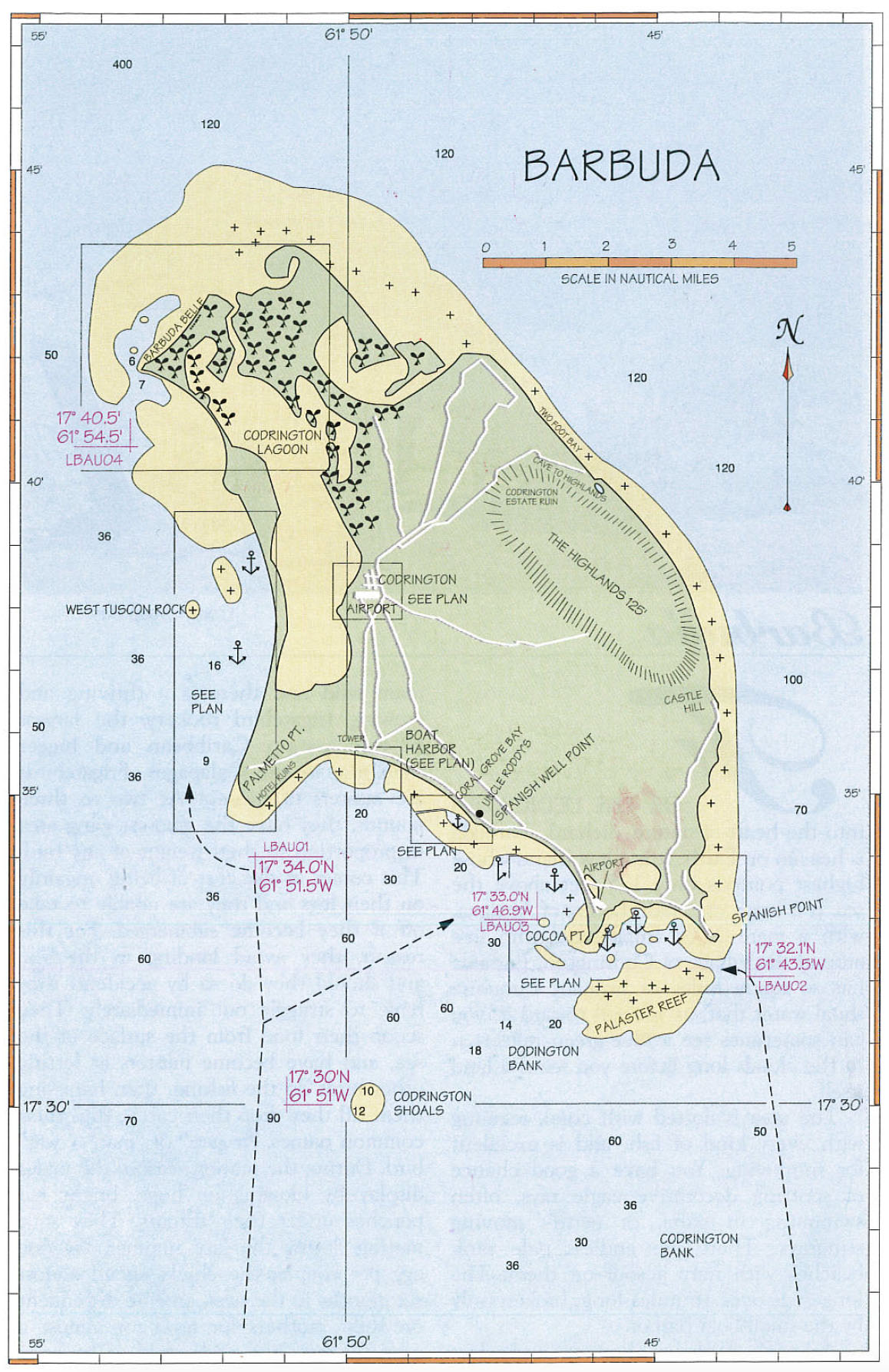 The area is dotted with coral. teeming with every kind of fish, and is excellent for snorkeling. You have a good chance of spotting decorative eagle rays, often swimming in pairs, or gently moving stingrays. There are endless pale pink beaches with nary a soul on them. The longest is over 16 miles long, broken only by the small boat harbor. Ashore, donkeys, horses, and deer roam wild and there is a thriving and growing frigate bird rookery, the largest in the Eastern Caribbean and bigger than any in the Galapagos. Frigate birds are masters of the air. At two to three pounds, they have the greatest wing area in proportion to their weight of any bird. This come at the cost of being ungainly on their legs and they are unable to take off if they become submerged. For this reason, they avoid landing in the sea, and should they do so by accident, they have to struggle out immediately. They scoop their food from the surface of the sea, and have become masters at letting other birds do the fishing, then harassing them till they drop their catch; thus their common names: "frigate" or "man o war" bird. During the mating season, the males display by blowing up huge, bright red pouches under their throats. They start mating during the late summer, lay one egg per couple; the chicks spend almost six months in the nest, and are dependant on their mothers for food for almost a year. George, our guide, told us he once saw a frigate bird fall in the sea and then watched two others come immediately, one on either side, to lift it back into the air.

Frigatebirds return to their nesting sites and Polynesians used them as homing pigeons. The Barbuda colony has been featured in National Geographic magazine and a visit to this colony is an outstanding experience, unique in the Eastern Caribbean. The colony is an unearthly spectacle. The frigates strange cries and the noise of their clickling beaks come from all around and the air is alive with dark, wheeling birds. As far as the eye can see, clumpy mangrove bushes are full of little heads sticking out, looking like intelligent fruits from an alien planet. The guides boat takes you right up to the birds, so if you bring a camera, you will surely get good pictures. While here, have a look at the intricate upside-down jellyfish that litter the floor of the lagoon in this area. Like coral reefs, these jellyfish have plants (zooanthellae) growing in them, and they turn upside down to offer these plants maximum sunlight. Intricate lacy tentacles maximize their surface area. 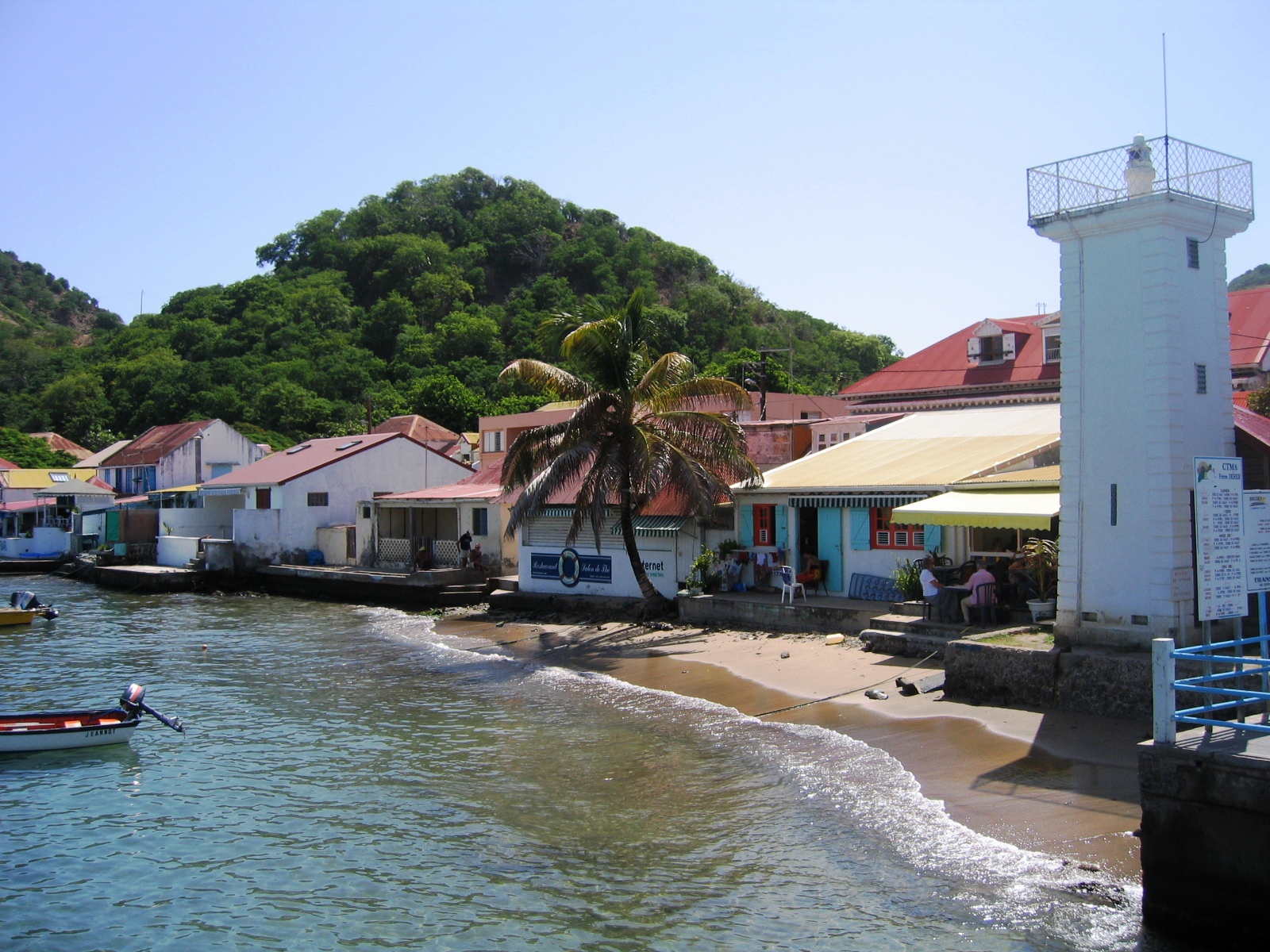 The Barbudan people were originally imported as slaves by the Codrington family who leased the island from England, beginning in 1685, for one fat sheep. Unlike most Caribbean islands, Barbuda was never a sugar plantation. The Codringtons used it mainly for growing livestock and root crops for their estates in Antigua and as a hunting ground for the Codringtons. Consequently, the Barbudans were not closely supervised and retained a tough independant spirit. They came to terms with the island enviroment, existing through cooperative efforts in fishing, subsistence farming, and hunting. When emancipation came, they stayed on the island, living in a cooperative way. Land is held communally and there is so much that no one fights over it. This has been the key to the Barbudans keeping control over their own island. Since there is no inividual land ownership, land cannot be sold to outsiders. England railroaded a reluctant Barbuda into joining Antigua when the two islands became inependant. Since then there have been several ambitious projects to develop the island and "Bring it into the 21st Century", an idea strongly resisted by many Barbudans, who see no benefit to changing their traditional lifestyle for one of being dressed up and employed to wait on tourists in exchange for the dubious benefits of better roads, more cars, and Kentucky Fried Chicken. Barbudans often have to fight schemes dreamed up without their approval. One involved a plan to put in a big desalination plant. Work started, but the Barbudans, fearing possible damage to their prestine, fish-filled lagoon, called a halt. Another time, the Antigua government allowed a huge hotel project to begin on Spanish Point. Mobile construction offices were erected. The Barbudan people wanted to keep this land as a park. They went en-masse to the project and shoved the offices over the cliff. It will remain a park. Many people would love to get their hands on Barbudas beachfront real estate, including, at the moment, Robert De Niro and his rich friends with the full connivance of the labor government. Some Barbudans are objecting strongly. It is difficult to know how long they can resist McDonaldizaton. The island has survived in part by selling sand, but thay cannot go on forever, so the pressure for some income-earning development will increase. The community land ownership rule puts the local people and council in a position to direct and control such development for the good and profit of the community; I wish them luck.

To get a feel for the island, take a bike or cab to Two Foot Bay which is at the edge of the highlands. The road ends at an area of sculpted cliffs, huge boulders, and deep caves on one side and on the other is a fabulous white sand beach. A small path leads back to where you see some bougainvilla. Follow this and you enter a large cave. If you climb up through it, you'll emerge 100 feet above, on the flat top of the highlands, with magnificent views in all directions. 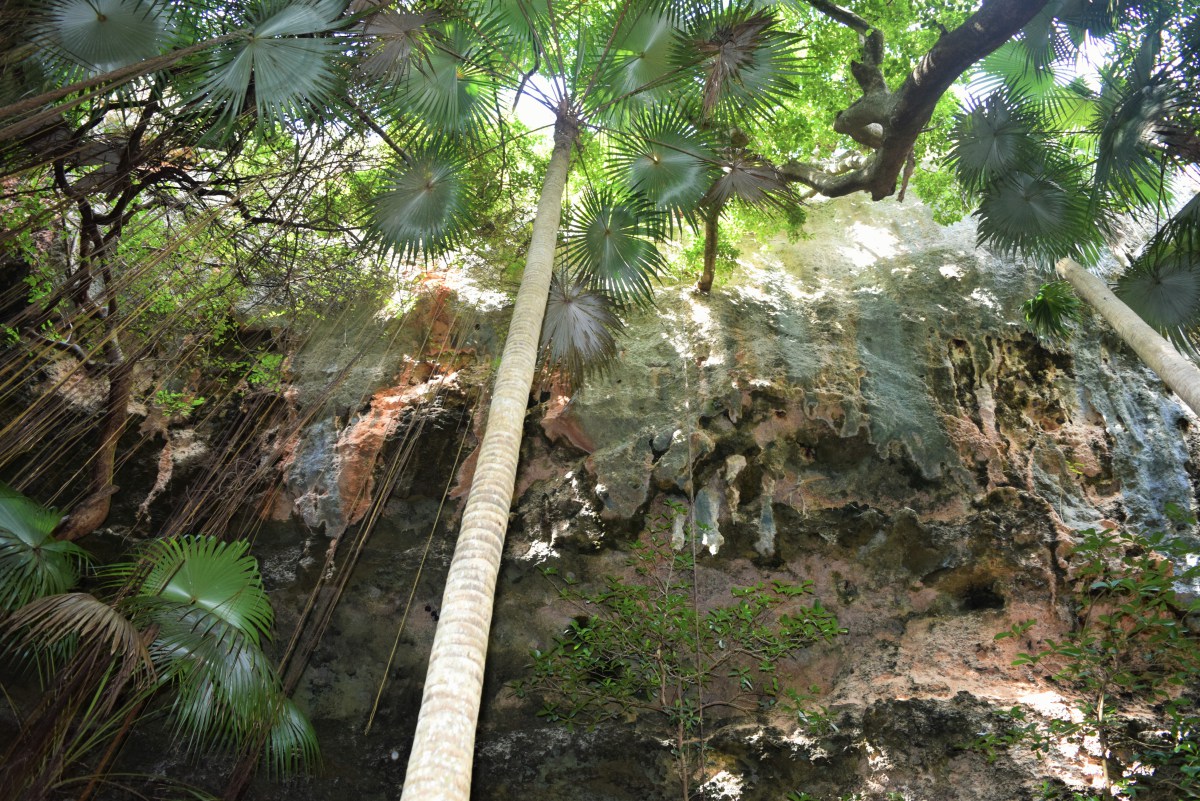 Another attraction is the Dark Sink Hole, a 45-minute walk from the ruins of the Codrington Estate house in the Highlands. Many of the plants along the walk in this dry area are 8 to 15 feet tall, enough to give some shade. Darby Sink Hole is round and crater-like, about 100 yards in diameter, and about 80 feet deep. For the most part the sides are overhanging cliff, but there is one place to scramble down. Inside is a mini forest, unlike the dry scrub above. Tall, wavy basket palms and loblolly trees reach to the top. Inside it is cool, shady, and pleasant. The overhanging walls include the dramatic shapes of stalagmites and stalactites. 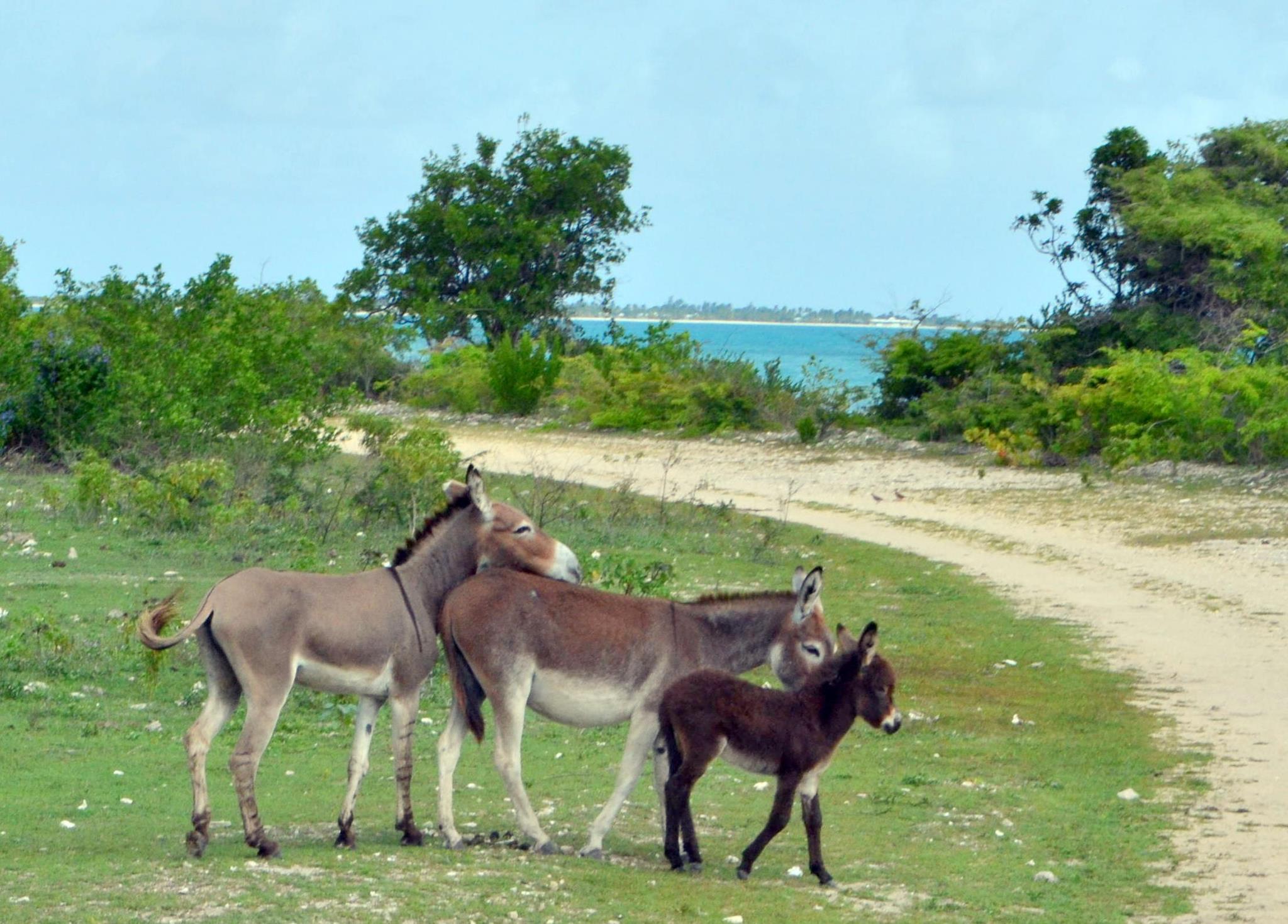 While in Barbuda you will see many horses and donkeys, which are allowed to run free, are completely at home in the landscape, and look magnificent. Some of the donkeys are wild, but all the horses are owned.